The Salva Vita Foundation – Hungary and their experts involved in project L.I.K.E. (Life Investment is the Key to Employment) conducted a research in which 205 NEETs took part in to explore the challenges of the long-term employment of NEETs. The results of the survey are grouped into five categories as follows:

The proportion of women amoung respondents is 61 %. It is 12 % higher than the proportion of women in Hungary in this age group (51 % man and 49 % women2). As a result, men in this age group participated in the Hungarian research in a smaller proportion compared to their population share. It could be assumed that women tend to face more difficulties than men in terms of education and employment in Hungary.
The highest percentage of respondents belong to the age group 25-29 years (42%), which corresponds to the predetermined focus of the survey. They are followed by the respondents who are in age group of 20-24 years (39 %).
The highest percentage of respondents are those with elementary school education (41%), and the same proportion of respondents has completed their studies at technical secondary school/high school (41%). They are followed by young people with vocational education (10%), and 7 % of the youngsters has college or university degree. Altogether 58 % of the respondents completed secondary education/technical secondary school and vocational school or has university degree but failed to get or retain a job. The Roma respondents typically had primary school education, 77% of the them had a primary school education. While Hungarian (or other nationality) respondents had higher level of education.
Most of the participants live in Budapest or the districts around. Only 11% are from regional cities.
The majority of 78%  identifies themselves as Hungarians.

Youngsters without any work experience – 21 % – especially who skipped school – probably have difficulties in starting a job. Assumption could be made that they need professional help to improve their competences and overcome social, economical and cultural obstacles.(Elementary school graduates 29% have not worked yet, 39% worked less than a year, 23% worked for 1-5 years, 7% of them worked for more than 5 years.)

The highest proportion – 36 % of the repondents have worked less than 1 year. Similar percentage, 34 % managed to stay on the labour market for up to 5 years, and almost 10 % of the surveyed have more than 5 years of work experience.

Lack of work experience was much more common among the female respondens, although 80% of them were in the 20-29 age group.

The 29 % of the respondens have no money at all. The school leaving age in Hungary is 16, and family allowance is paid until this age but there is no allowance for those who left school and have never been employed before.

The available budget is little for the half (50 %) of the target group. This income can be raised by working on the black market for those who are over the age of 16.

On the question of personal problems, the highest percentage (70.2 %) has the feeling of insecurity or uncertainity which is more common among women and older age groups.

Anxiety is indicated by 55.1 % of the respondents, which goes together with fear or panic attacks (indicated by 46% of the responens) – forms of anxiety – is the most common mental problem for the young persosns who does not not work or study at age 15-29.

High rate of the surveyed persons (61 %) indicated the symptoms of depression. Eating disorders (23 %) are also considerable, and 14 % of the interviewed youngsters reported alcohol or other addiction.

55 – 61 % of the interviewed people reported various manifestations of mild psychiatric disorders (from the anxiety-depressive spectrum). This data shows that the youngsters are in aware of their mental problems, and 48 % of them require psychosocial support to achieve their goals, but only 19 % of the respondens turns to psichologysts or psychiatrists.

48% of both male and female respondents would require psychological and psychosocial help, so there was no gender difference in this matter.

High percentage of respondens (55%) live with their parents/family members. The reason behind this could be not sufficient finance background. The goal for more than 84 % of the respondents is to get a job and realize better financial conditions. However, pursuit of financial independency does not mean efforts for independent living in all cases, due to cultural reasons. It is also highlighted in the survey that family means not only financial but emotional security for these youngsters at age group 15-29. According to the results, youngsters are highly interested in their family members (87 %) and prefer turning to them with problems (72 %). 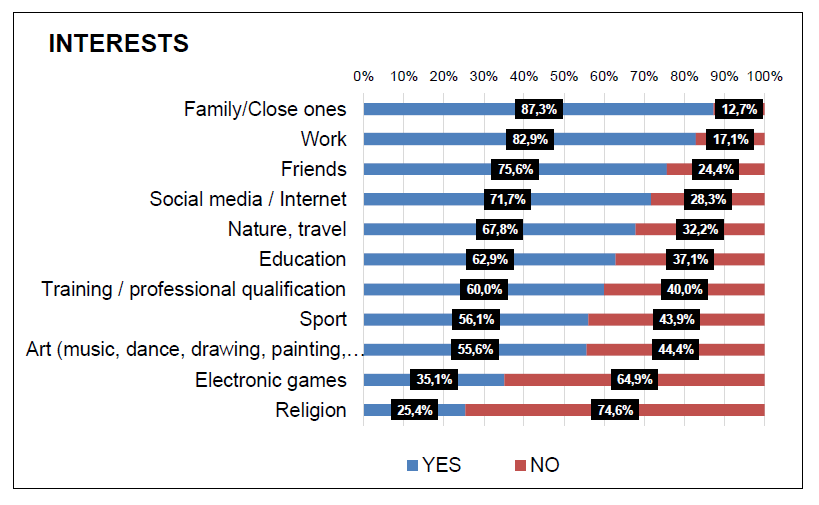 The highest proportion of respondents confirm that they focuse on their family members and relatives, as mentioned above. Work is the second in the rank (83 %), followed by friends (76 %)

The main source of information for this generation is social media (85%) where young people get and share information. This is a world without barriers and a possibility for people to form an image about themselves, which can be far and different from their reality. On the second place (77 %) there are friends and aquintances – probably from the same age group – whose opinion is decisive followed by family members and close relatives (74 %). While family is on the third place as source of information, young people trust their family members (77%) and friends (59%) much more than internet forums (23,5 %).

Almost 60 % of the respondents imagine life after 5 years as work-based and 33 % associate it with learning. Only 3 % think that they will study in 5 years. The high perception of work commitment indicates social problems however, deficiencies of the education system together with failures in the past may be behind refusal to continue education.

Most of the youngsters accept the evaluation by others (72 %) and, even more – 82 % of the respondents are aware of the importance of getting rid of bad influence by other people.

Youngsters are committed to working and achieving financial sustainability (83 %) and these are the first in the ranking of the values. Family and human relations are also important values for the respondents and, 57 % would like to expand their human relations.

The quarter of the respondents are satisfied with their health status, and almost the half of them – 49 % were somewhat satisfied.

In terms of life satisfaction in the last month, the respondents most often – 49% choose the answer “somewhat satisfied” followed by the “I am not satistied” – 38 % and only 13 % is satisfied with it. It highly corresponds to the previously given answer that 8 % of the youngsters do not need any personal change and 7 % would not change their lives at all.

The majpority of the group consists of female respondents, mainly of Hungarian ethnicity with working expoerience 1-5 years where more than half of itr lives with their family.

They are uncertain, insecure, having mental problems and almost 50 % of them are aware of it. They expect support mainly from outside, but are also motivated to change their lives and improve their skills. Their main goal is to get a job, but 1/3 of the reaspondents is ready to study at the same time.