On November 21, 2019 in Sofia, a focus group was held with representatives of employers, human resources managers, recruitment agencies, heads and managers of institutions and companies to explore the reasons for the poor integration of NEETs in the labor market from the perspective of the employers.

Aims of the focus group

The participants in the focus group were invited to present their views on possible obstacles for young people from the target group for their exclusion from the labor market and, more broadly, from the social environment.

The moderator made an introductory comment on the nature of the mental disorder, the differences between the different types of disorders in terms of social functioning and the ways of understanding the problems of young people from the target group. A brief comment was made on the nature of stigma and discrimination against people with mental disorders in general and young people in particular.

The reasons for social isolation were discussed in the context of the target group’s profile.

Each of the participants gave their proposal to compile a list of obstacles of a subjective nature.

The results of the discussion were arranged in two categories – subjective and objective barriers to the integration of young people in the labor market. 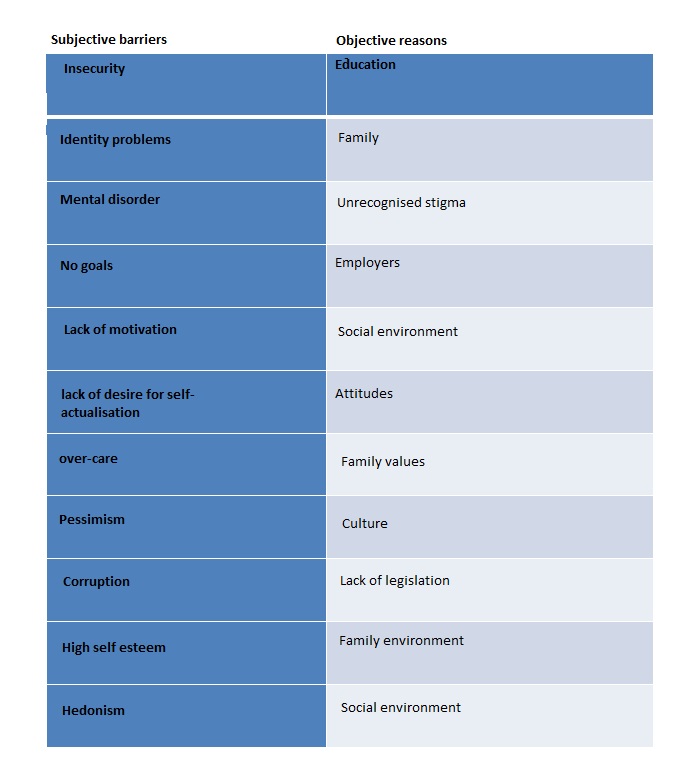 This aspect of the passivity of the target group was considered by the participants a reflection of the social environment in which these people live.

The complex nature of this subjective feeling, which is formed by a series of failures, was again emphasized, as the social environment in no way stimulates young people to get out of the vicious circle.

Lack of motivation is not so much related to poverty as to the psychological attitudes of the target group. More vulnerable and sensitive individuals close in on themselves more quickly after the first failed attempt, if there was one at all.

The feeling of insecurity was highlighted in the first place by the participants as an obstacle to active job search.

Not all participants had their own experience with hiring job candidates and hypothesized, but in general the group agreed that the main reason for the feeling of insecurity is rooted in the education system, which does not affirm a personal beginning and self-confidence and self-sufficiency. .

The educational system does not emphasize the talents and qualities of young people and does not direct them to the realization of these talents.

Of course, uncertainty is a consequence of many factors that were mentioned and discussed later in the discussion.

Some of the participants, based on professional experience, outlined one of the reasons for blocking social growth as an incomplete development of identity and hence the difficulty of making an adequate social choice of role.

The role of the family in this has been widely discussed. Forms of overprotection by parents or neglecting parents have been outlined, which ultimately lead again to immaturity and inadequacy of the requirements of the environment in the process of growing up. Lack of identity leads to loss of landmarks, goal setting and self-realization which can explain the passive behavior of individuals in the target group.

The presence of a mental disorder is among the most serious barriers to the socialization of the young person, resp. its integration into the labor market. Some participants shared personal experiences in contact with a mentally ill person in a job search situation. The group developed a debate on the extent to which it is possible to hire a person with a mental disorder who is not a burden to the employer and how to motivate the latter to hire such persons.

The possibility of changing the legislation was discussed, which currently does not sufficiently motivate employers to take such steps. The lack of incentives in the legislation for the employers themselves was pointed out, but only mandatory requirements. The moderator made a comment in the direction that it is actually only for people with severe mental disorders that lead to loss of social skills and abilities for communication and integration. The difference between severe and frequent mental disorders, which cover almost one fifth of the population and in which these deficits are not visible and difficult to detect, was outlined. With regard to the target group, it is precisely these disorders that are the cause (or consequence) of passivity and denial of employment.

Serious attention was paid to the existing stigma towards people with mental disorders.

The lack of goals at work was also pointed out from the point of view of the employer and the organization of work in a given company. This fact was discussed with regard to the rapid departure of young people with the profile of the target group.

Some employers are unable to extract the best traits from workers, especially if they are pre-stigmatized due to illness, previous career failures, low education, and more.

Lack of desire for self-actualization

The lack of desire for self-affirmation was discussed from the point of view of the psychology of this type of young people.

Again, a number of factors were included to shape this type of psychological attitude, with the emphasis on character predisposition and family-inherited behavioral patterns.

Again, in the general context of the overprotective family as a factor for passivity, it leads to apathy and lack of motivation for self-realization.

These considerations of the focus group are also confirmed by the analysis of the answers received from the survey regarding the economic status of the respondents and their attitude towards it. The predominant share are those respondents who neither study nor work (35%), but have little money or answered that their money is “neither a little nor a lot” – a total of about 70%.

This fact, combined with the close connection with the family, could be linked to the fact of over-care, which suppresses the natural need for independence.

The problem was discussed in the context of the culture inhabited by young people. The lack of positive examples and incentives from the environment, including the media, social networks and friends, builds pessimistic visions for the future and negativity towards good practices that can serve as examples.

The issue was expanded with the characteristics of modern mass culture, which, in principle, does not predispose to positive development of young people.

The problem of corruption is widespread and was mentioned in the focus group discussion as an additional factor for demotivating young people.

The specifics of corrupt practices were not clarified, but the importance of this problem for employers was noted, as well as imperfections in the legislation.

In the context of the general characteristics of the target group, this factor was mentioned as an additional circumstance for the formation of a passive attitude towards employment. High self-esteem is again associated with the hyper-protective family and the hyper-caring environment in which the individual develops.

The term is Greek and means pleasure. The meaning of hedonism in its modern version is an attitude towards life based solely on the search for pleasure. The modern subculture predisposes young people to such attitudes, which, if not corrected by appropriate education, are wrongly established as basic values.

It can be assumed that some of the people in the target group meet this character profile, which in combination with other factors such as insufficient family upbringing, improper education, character traits and others, is one of the reasons for the marginalization from the social and work environment.

From the discussion in the focus group, subjective factors for the condition of young people in the target group and objective reasons for this were highlighted. At the same time, some proposals were made to change the legislation to be more flexible and in a balanced way to meet the interests of both employers and the target group, and in a broader sense, the interests of the community.

The limited time did not allow for a more in-depth discussion on the other tasks related to the ways of informing young people, adequate steps for their motivation and concrete proposals for changes in the legislation.