Demographic Data of the Research of NEETs

Implementation of the Research Phase of the Project L.I.K.E. – Life Investment is the Key to Employment

According to World Health Organization data, four of the six leading causes of disability are due to neuropsychiatric disorders (depression, alcohol abuse, schizophrenia and bipolar disorder). The LIKE project examines precisely this growing proportion of young people between 15 and 29 years of age, with mental health problems, as well as the inability of conventional employment methods to address the specific needs of this target group.

The broad partnership within the consortium works internationally, seeking common European solutions for social inclusion and sustainable employment for young people with mental health problems. The international studies carried out in Bulgaria, Latvia, Hungary and Ireland will provide the necessary data to create an innovative multidimensional approach for the inclusion of the target group.

The results of the survey are grouped into several categories including demographic data, employment status, family life, interests and health status.

The biggest part of the target group has completed secondary education as a relatively high proportion – about half of those surveyed, and about 1/3 are university graduates. For the most part, unemployed young people who are not engaged in training are educated and are still outside the labor market.

From the Hungarian data we could see that the Roma respondents typically had primary school education – 77% of them. While Hungarian (or other nationality) respondents had higher level of education.

The majority of the youth surveyed are from the capital or from another city. 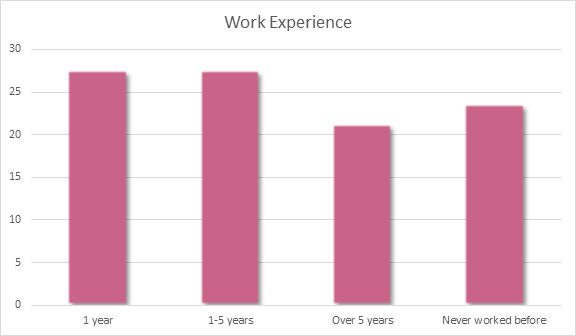 The largest part of the surveyed group, has difficulty in starting their working careers and realization. This is the most notable in the research of PINS association where around 40%, which is the largest part, have never worked before. In Hungary youngsters without any work experience – 21 % – (probably the ones who left school very early) have difficulties in starting a job due to not sufficient education.

Similar part are the people who have managed to stay in the labor market for up to 5 years. It is important to note that the target group is dominated by young people who have never worked, followed by those with a minimum employment period of up to 1 year. This is an indicator of serious startup barriers, respectively finding and retaining a job among the target group.

In terms of economic status, it is striking that the majority of respondents are those who neither study nor work (35%) but have little or no money, or say that their finances are  “neither less nor much” – a total of about 70%. About a quarter say they have absolutely no money (26%) and only 4% say they have a lot.

From the Latvian data we see that 59,7% of young people have little money for their daily needs, but 15,4% – “Not at all”. Poverty makes the access to health, education and development difficult for children and young people.  This also explains the answers to the next question.

On the question of the nature of personal problems, the highest percentage (37.5%) points “insecurity”.

It is noteworthy that individuals who indicated some type of psychiatric disorder – depression and anxiety accounted for a significant proportion of those studied – about 30% for each of these disorders. If eating disorders and addictions are added, a significant proportion of mental health problems will emerge, which also explains the leading feeling of insecurity as a cause of personal problems. 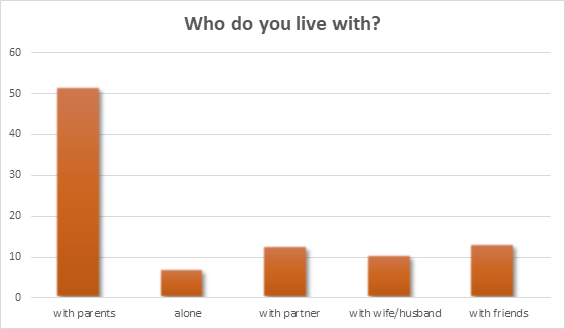 The lack of sufficient financial resources to meet their daily needs forces young people to delay parental separation. As other studies show, poverty in children and young people is directly dependent on parental poverty – that is, so-called. ‘Intergenerational poverty’ or ‘intergenerational poverty inheritance’. The causes of poverty are related to the lack of employment and income from parents’ work, lack of education or illness.

In order to interrupt this accumulation of inequalities between the generations, support is needed in fulfilling the parental function, providing social and family benefits, using social services, promoting employment and professional realization.

About 1/10 of the respondents take care of an ill or addicted family member.

Certainly, this commitment further complicates their realization in the labor market.